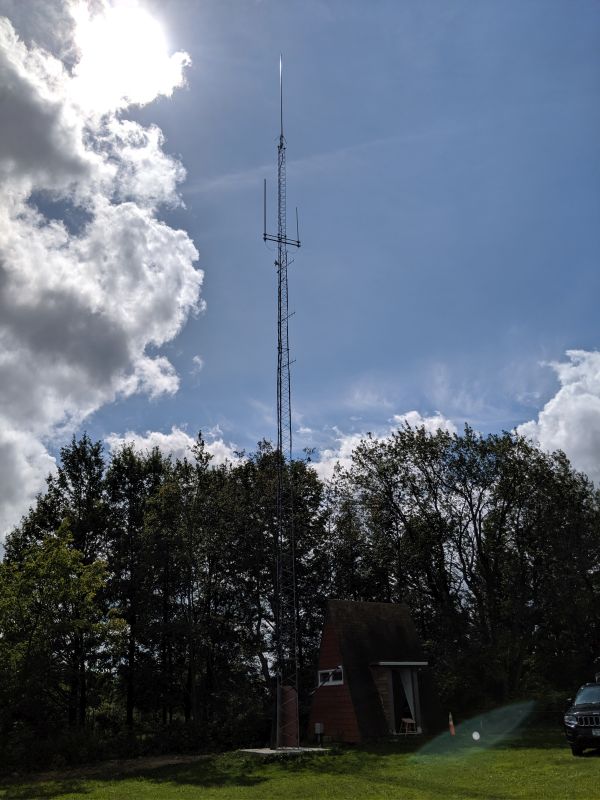 As the 2018 construction season closes, we are happy to report that the replacement tower base is installed at the Cole road site. It is set 42 inches below grade with six yards of concrete. When the dry conditions return to the site, the tower erection project will continue. Completing the entire project this year was not possible because of the time necessary to put all of the details together and fund the many aspects of it. We thank BARRA member Bob Schober, K2CRR. Without his donation of a used 90-foot Rohn SSV tower, we would not have been able to continue to make progress with the project.

As plans continue for springtime, the tower completion will require an on-site crane to lift the new tower sections in place as well as removing the old tower. The crane rental costs can be as much as $1500.00. In addition, we may be spending $250.00 per hour for a tower climbing service to assist in the tower work. There will also be the need for additional hardware and RF cables and connectors.

As of today, the balance in our tower fund is $1,900.00. This is not enough money to fully fund the balance of the job. We ask that members that have not yet donated to consider doing so now. Thank you to everyone who has helped financially to get us this far. To all members, please consider making an additional donation. Even the smallest of donations will help BARRA to return the Cole Road site to fully operational again.

This is a major club project that will help enhance the performance of our repeater stations and maintain the value of BARRA’s primary asset in Colden. Everyone’s help is needed for this to become a success.

Donations can be mailed to BARRA at PO Box 507, North Tonawanda, NY 14120-0507. Donations can also be sent directly through PayPal at Buffalobarra@gmail.com.

To the BARRA constituency and amateur radio enthusiasts:

The club has a 100 ft freestanding tower at the Cole Road repeater site. Forty feet of tower collapsed during a winter storm in early 2017. The membership of the club has rallied since this occurrence to rebuild the tower to its former functionality. New antennas and feed lines were placed on the unaffected portion of the remaining tower, replacing the equipment damaged by the afore mentioned storm. New 2 meter and 220 collinear fiberglass stick antennas as well as numerous yagi antennas were replaced. Other critical items were added to the remaining tower as well. Hard line of 7/8 inch and 1/2 inch, their connectors, and several hundred feet of LMR-400 with connectors as well were all replaced on the structure. The tower as now being used, however, is at a fraction of its former radio coverage.

All of these renovations would not have been possible had it not been for the financial support of those donators who gave graciously to the cause. For that, the club and those who use the Cole Road repeaters and tower, thank you.

As benevolent as those donations to the tower are, this enterprise requires more financial assistance. The second part of the tower reconstruction project needs to commence. The former structure needs to be replaced with a new 100-foot tower. All of the afore mentioned equipment purchased for the partial structure is being transferred to the new one. Nothing will be discarded.

Thank you to those club members who made the building permit from the Town of Boston possible. This will allow the club to replace the old tower with a 100-foot similar structure.

As always, the budget is a consideration. Our proposed budget is as follows:

Reinforcing rods and other installation hardware $ 200.00

This goal can be accomplished, however, only with the help of BARRA members. If all seventy members would possibly consider donating $100 each, we will come close to reaching the goal of the new tower. The club will reimburse members, who donate for this cause, should we not reach our stated goal.

Amateur radio is a hobby that is enjoyed by many hams here in western New York. Ham radio has given so many people enjoyment. Isn’t it time that we gave back to amateur radio?

Thank you for your attention and consideration.

Donations should be mailed directly to:

Or, send a donation via PayPal to buffalobarra@gmail.com  (PayPal click-to-pay button coming soon!)

Welcome to the web site of the Buffalo Amateur Radio Repeater Association, or BARRA as we are more familiarly known. BARRA is the premier repeater club in the Buffalo/WNY area, operating voice repeaters on almost every VHF and UHF amateur band, and providing linking between those machines and those of other club’s repeaters or systems. Feel free to click on a link above to learn more about our club!